Mr. Come, rapper from Potenza, lucania (south Italy), who led to the rebirth of PbC (PenBrothersCrew) in honor of the to hip hop month, presents to the audience a project with important international collaborations, which was born independently and with the intention to support a Mc. whose voice pushes from the south, like Mr. Come's, and talking about different southern places, for example: OO HASS (this is his name) whose dream is bringing his music from Uganda to the II volume of Hip hop international rap, giving the basis to a CREW with southern roots from the South African culture (OO HASS), with the brigand spirit of southern Italy (Mr. COME) and growing with the flow of the Parisian ghettos of SADIX.

In the first volume we find featurings from the East Coast with Bx_yung_gzBrooklyn and J.Nolan, a leading artist in Georgia (Atlanta) home of BLACK LIVES MATTER movement, whose music plays in the chest the redemption of people; Then in Latin America we have LA VOCES DEL SILENCIO in the trck. 4, Mc active in Colombia (Bogotà) which carries on the culture of street jam sessions, and MC. CAFOR.
Traveling on the wave of flow we meet artists such as the Caribbean rapper SADIX, in tracks. I and VII, naturalized Italian but born in Paris and from Banlieux the feat. with DaPugliese.

Mr.Come tells us that "it's for my people" (cit. From track.IV), "for people like me who grew up listening to artists belonging to the underground of the 80s and 90s in INOKI's Italy and with him the RAP PIRATA collective is born, which we count among the feat of this first volume.
It is a common dream that takes us back to when it was the TAGs that laid down the law, when from the wheels of street hip hop comes to life from the combination of breakdance, graffiti, rap and scratch. We carry forward the message of pioneers of the genre such as Afrika Bambaataa, we too answer: "PEACE" to those who bring their style to our ideal of hip hop, we are all down by law .... well ... our dream is to bring hip hop back to the radio, in streaming…. To give it back its luster in an entirely mainstream era, in which music is born more and more in the studios and less in the streets "...

Among the first to give light to this project is certainly ZEUS ONE, from Milan, which actively participated in the creation of the tracks and vinyl, available in all digital stores from November 28, in which we have a monster track feat with Gxyoung, a tribute to those who support our work.
From Italy collaborations are born with ZANTE, AKA ZANTENA from Perugia, trck.IV, getting to the south with DISASTRO LOCO from Caserta.

Each artist who made possible the release of this work has brought an added value, making it fluid and accessible to a wider dissemination and understanding, contributing to the continuity of hip hop culture in an international key.

We are pretty sure that many small realities can, together, represent a great attitude between multiple flows of consciousness and languages, making this project unique.

We will continue to exist on the international scene and we are ready to bring by the end of the year the release of volumes II and III to push this culture, ours and of all those who will give support through merchandising from our official in-store, by connecting at the link: https://teespring.com/it/stores/my-store-10648525.

In the name of the predecessors who taught us to rap, we want to give the right weight to a project that will deserve a place in the history of hip hop music.

From 27 November 2020 through the link: https://www.diggersfactory.com//vinyl/234341/mrcome-hip-hop-unity-international-rap?fbclid=lwAR3-cg_6GQumtedCTAdvXrzKc-eeuwM0UWFWMITYe7w4-3njbnmDe1xszU it will be possible to purchase with a national-popular 13 € the vinyl in pre-order, remember that with the vinyl you will have the opportunity to listen exclusively to the monster track created by the musical genius of ZEUS ONE with Bxyungs.

For all lovers of hip hop culture, for those who support our music, for info and / or collaborations, we refer you to the official Facebook page of Mr.Come 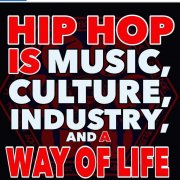