30/11/-0001 Scritto da Gleamer Gleamer 1
Gleamer was born in 2008, as a natural consequence of Luca Sammartin's artistic career, since formerly he was leader of "Kudarealphix" and "Acidhead" projects. The first line-up of the band works on some Luca's electronic pre productions. The formation includes, beyond Sammartin (voice and guitar), Andrea Bevilacqua (bass), Alessio Magenta (drums) and Paolo Magnabosco (guitar). As a result of their work in these first months, "Aftertastes EP" is released, initially as a press promo. First Gleamer's revolution occurs as the guitar player leaves the band and he's replaced by Alberto Massignan. On his arrival, new songs are written and the band's sound is defined. In August 2009 the band fits out his studio, divided into two locations, a B&B and a house in disuse. Recordings finish in May 2010. Only the vocal parts are recorded in Haunted Studio, in Vicenza. While working on the mix, the guys start rehearsing in order to perform live their album, still with no title at that time. A second revolution takes place in summer 2010, when Alessio and Alberto both leave the band. They're replaced by the drummer Stefano Shollah and Elia Grosselle (aka Paul Zigfrist), whose electronic sounds balance out the loss of one of the guitars. The songs of the album, which is called "The Chasing Method", definitely change in the live performance. In early 2011 the album is ready. The music video of Gleamer's first single, "The Pick", is shot, and their EP "The Pick / Snowstorm Outside / RMXS" is released in free download by Snowy Peach. The release of "The Chasing Method" is planned for 2011, accompanied by the publication of the second single, "Dance". 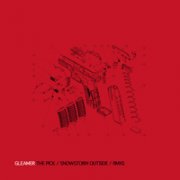