22/03/2021 - 18:35 Scritto da LAURA MASOTTO LAURA MASOTTO 0
Laura Masotto is a classically-trained Italian violinist in a state of constant exploration. She started studying violin at the age of five and launched her career at fifteen, performing concerts in chamber and symphony orchestras across Europe. Over the years Laura Masotto has worked on theatre projects and as a session musician and performed live with internationally renowned artists. In 2019 she released her first solo album “Fireflies'', composed and performed entirely by her. The album was presented in Los Angeles with Sofar Sounds. She has contributed pieces to several label compilations: “Before the Rising Sun'', part of Strings Layers of 7K!.

WE, the new album out on June 11th, is a journey in search of humanity, a deep observation of our society and of our human condition, a search for emotions in a year which has led us to look inside ourselves. WE is a meditation on life.
With WE Laura Masotto conveys her own realisations about what she has discovered to be truly important. That is, us, all of us, for better or for worse, WE as humans are the most important things in our lives. The album contains several layers, which reflect the dualism which is contained in existance: life and death, water and fire, love and pain, present and past, the conflicting sense of human nature and its mystery. The violin and string compositions blend with electronic sounds, integrating instrumentation often connected to spirituality and shamanism such as Tibetan bowls or shamanic drums.
The album sees collaboration as a central theme, with Laura collaborating with Anglo-Spanish composer Roger Goula on ‘Refugees’, the Berlin-based Greek producer Hior Chronik on ‘Ithaki’, and Italian producer ATŌMI plays with electronics on the sweeping track ‘Water’.
The record was composed and created in several different locations during this “on/off lockdown period”, from the city of Verona where Laura Masotto lives, to the Bolognese countryside and the seaside of Barcelona (during an artistic residency at Fabra I Coats), to a house overlooking the massif of Mont Blanc, environments transposed to the sonic palettes of WE.
In a historical moment which divided us, Laura Masotto felt the pull to connect. Her music has always presented itself as a bridge: “Music was my strength. Reality was freezing time and I decided to listen to each moment, the only one that really exists: the present.” 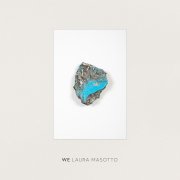