05/05/2016 - 16:29 Scritto da Meta- Meta- 1
Luigi Calfa and Simone Giudice have been collaborating since 2013; together they have founded a personal experimental workshop called Meta- , that origins from the Greek preposition and prefix meta- (μετά-) , meaning "after", or “beyond” and indicating a concept which is an abstraction from any form of limit [space and time]. Their first release ‘Ambenti' is scheduled for Fall 2015.

Simone Giudice is a young electroacoustic composer and student of the Conservatory of Music 'Santa Cecilia’ in Rome. From his techno background he derives part of his identity that can be described as a continuous swing between ambient paths and floor-addicted experimentations.

Luigi Calfa is a young composer of electroacoustic music, pianist and sound artist active since 2010 with several projects: Luigi Calfa, Years Without Days, Meta- . His sound research is in a constant development and inspired by minimalist music in order to build sound textures and rhythmic circular structures. However, his compositional process has no defined rules but is influenced by the environment around. 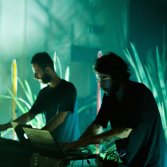