23/09/2015 - 15:17 Scritto da Terrorway Terrorway 1
TERRORWAY was born in February 2009 from the idea of Ivan Fois (guitar), Cosma Secchi (drums) and Anselmo "Memo" Mascia (voice). The bass player Giovanni Serra immediately joined them, becoming officially part of the band on march 2009. Soon after the band started to work on the first EP “Absolute” recorded and mixed at V-Studio (Cagliari, Italy) between March and April 2010. The EP was mastered by Ettore Rigotti (Disarmonia Mundi, Slowmotion Apocalypse), contains five tracks and was released in December 2010. While composing and recording the EP, the band took part in summer festivals like Heavy Sands 2009 (together with a.o. Mnemic) and Eventi Metallici Fest (together with a.o. Paul di Anno). In December 2012 Terrorway performed they first italian tour (in a date together with a.o. Forgotten tomb).
Terrorway also appears in some important compilations like Kill City vol.17, (with the song “Her last breath”) released in October 2009 on the label 272 Records, Loud Music Compilation vol.19 (with the song “Art of discernment” and with great bands such as Skinlab and more) released on december 2012 by Street Cult Marketing and finally on the issue n°34 of Devolution Magazine, released in June/July 2013. In February 2011 Anselmo 'Memo' Mascia decided to leave the band and has been replaced by Valentino 'Sidh' Casarotti in November of the same year.
While composing and recording the first LP, the band took part in several festivals like Solk'n Roll 2013 (together with a.o. Hour of penance).
In August 2013 the band signed a deal with the label Bakerteam Records for a worldwide release of the first album entitled "Blackwaters" on September 2013. The Album was recorded at Corpse Factory Studio in Cagliari between December 2012 and January 2013 and mixed and mastered by Jacob Olsen (Hatesphere, Moonspell, Corpus Mortale, Born From Pain and many more) between February and March 2013. In conjunction with the first album was released the videoclip "In a Swamp", the first single of "Blackwaters". In November 2013 Terrorway performed the second italian tour (the last date together with a.o. M-Pire of evil). In 2014 opener for Soulfly at "Steel Day". In December 2014 the singer Valentino Sidh Casarotti has been replaced by Andrea Orrù. 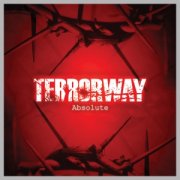