05/09/2012 - 21:21 Scritto da Railroad Obsession Railroad Obsession 0
Bio
I'm Born in the 1981 Sassari (Sardinia) I started to play The electric Guitar at the ages of 13 years old and i'm a self-educated guitarist ,i 've played a very large variety of musical styles during my life but my favourites are heavy-metal rock of 60' 70' and blues .
In the last years i've played just with the acustic guitar traveling around ..and my style is always work in progress i love that.
I compose and write all my songs .

Description
Railroad Obsession recorded in Sardigna, sweated in Brussels & payed in Amsterdam is a first Gian Paolo Oggiano solo album and is a mix of a different influences and musical styles.
The name of the project is synonym of trip and all the songs contained in the album take ispiration by some journeys and trough the life experience of the artist . All the project taste like freedom ,love,friendship and good vibration and there are not a specific lines to follow it's just one man, an open road and his guitar. Some tracks of this album will be used like a soundtrack for a Documentary about immigration called "Who is the Strang€uro?" filmed by Dario Sajeva & Tiziano Pierulivo between Bologna, Tolouse and Amsterdam . 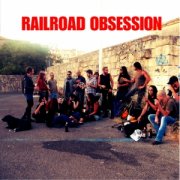