Formed in 2007, SORRY OK YES has quickly become one of the most well known underground acts in Italy. Their music has been defined by NME as "a mixture of modern rock styles, featuring spoken choruses and fast-paced guitar riffs that appeal to the casual listener and rock aficionado alike". The duo's close-knit musical relationship and seamless interplay is a result of performances at numerous venues throughout Europe and United States. Highlights include recent performances at South By Southwest (SXSW) opening for the legendary New York Dolls, Liverpool Soundcity Festival 2008 (along with Crystal Castles, Hot Club De Paris and The Wombats), Italia Wave 2009 (sharing the stage with world-known bands like Placebo and Kraftwerk), Cooler in Bristol, Purple Turtle in Oxford, Dublin Castle, Camden Barfly, Dirty Water Club in London, Dimmidisi in Rome, Australiano in Florence, Circolo Magnolia and Magazzini Generali in Milan and literally dozens more.

The duo has been cited as "[a band that] updates The Kinks for the 21st century" by Dany Sloan of Exitfare and has gained increasing attention, both nationally and abroad and their second single "Prime Time Idiocy" has received massive playing on over fifty radio stations worldwide, including KQKQ and Phoenix FM.

Following the quickly sold-out EP "Doing More With Less"on Los Angeles-based indie label Cal Rock Records in April 2009, SORRY OK YES released their first album "Rubberized" in 2010. Recorded in a typical Tuscanian "villa" near Florence, the album has received enthusiastic reviews from both national and international press, being cited as "one of the best italian record of the year".

Spending the whole 2011 on working on their new project "Turning Black into White", SORRY OK YES is going to release a set of 12 singles starting from December 2011 - the first one being "Facedown", mastered at Abbey Road Studios in London. 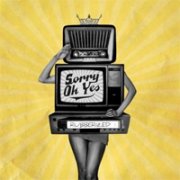