18/01/2014 - 17:55 Scritto da The Q's The Q's 0
It begins in November 2012. The name Q's born after Dario (vocals, guitar) and Alessio (electric bass) watched a movie, 007 Skyfall, and they think that it could be a very great name for a rock'n'roll band. With their long time friend Valerio on drums, they began to jam and compose some material with the only objective to do the best rock music they can do. During these months they wrote a lot of songs, and recorded four of them in an EP, “Put Flowers On Your Martini”, along with their former singer Stefano and guitarist Pask. You can listen a lot of influences in their sound (“we put on our music all things that we like, without limit ourselves”, says them), from rock'n'roll to new wave to post punk etc. etc. etc.

Now, with new guitarist Antonio, Q's announce that they're ready to bring their music everywhere they can, “from our city to your home. And we want do it, strongly, from now!!!” they say. Their new EP “Not Necessarily Alive” (out for Myo Agency label) is going to rock your socks off with five brand new killer songs!

So, if you're curious to know more about The Q's, go to find them, from Soundcloud to Facebook to the next door live club! 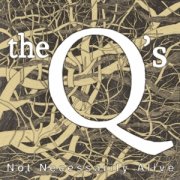